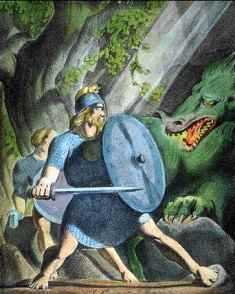 We divide the history of English literature into seven periods; the first is the Old English Period. All works that were written before the year 1066 belong to it. It is generally assumed that a great deal of Old English poems have perished without trace. Those that survive are mostly in a single manuscript, written down in the West Saxon dialect. The English language of those days was quite different from present-day English: there were many different Anglo-Saxon dialects, which together are now called Old English. We know the names of only two poets from this early period: Cædmon and Cynewulf. Cædmon composed a great deal of religious verse in the Abbey of Whitby in Northumbria, and his work 'Cædmon's Hymn' is an important work that survived. But almost all Old English poetry is untitled and anonymous; so is 'Beowulf', a long epic poem of 3,182 lines. We still do not know the name of its author; moreover, it was not given the title 'Beowulf' until 1805 and not printed until 1815. It is the finest surviving old poem, remarkable for its grandeur of tone and the brilliance of its style. It contains appreciative descriptions of valour in battle, stirring speeches, elegiac reflections on man and his world, love of the past, and a keen sense of the transience of things. It was transcribed in the West Saxon dialect at the end of the tenth century, at least two centuries after its composition. We possess the poem only because the unique manuscript survived the fire of 1731, which destroyed or damaged much of the remarkable library of Sir Robert Cotton (1571-1631), in which the 'Beowulf, manuscript then was.

'Beowulf' is the first great English heroic poem, and yet its subject is not England but men and women from Germanic legend and history. It takes place in Northern Europe before Christianity had reached that part of the world. The poet, who wrote centuries later than the time of the poem's action, was a Christian and may even have been a churchman, but he claimed for his subject pre-Christian nations living in and around the lands from which the Anglo-Saxons had originally migrated to England. The Germanic tribes who settled in England in the fifth century brought with them the Germanic heroic code. The Germanic warrior was a member of a comitatus, a warrior band. Life was a struggle against the inevitable doom of a meaningless fate: wyrd, which originally meant: what happens. The Anglo-Saxons were pagans, and there is no evidence in their literature that they believed in a life after death like that of Valhalla, the hall in Scandinavian mythology reserved for dead heroes. However, there are references to the worship of heathen gods such as Woden, and the practise of placing coins, weapons and other goods with the bodies of their dead suggests a belief in some kind of after-life where they could be used. But in their literature a different kind of immortality is stressed. This was 'lof', which was won by bravery in battle and consisted of glory among men, the praise of those still living. These two ideas of 'wyrd' and 'lof' gradually acquired Christian overtones, and the reference of passages from 'Beowulf' is not likely to be entirely pagan:

So must a man do when he thinks to win enduring fame in battle; he will show no concern for his life.

Fate often spares an undoomed man when his courage is good.

A pagan warrior brought up in this tradition would show a reckless disregard for his life. Whether he was doomed or not, courage was best, for the brave man could win 'lof' while the coward might die before his time. This is the spirit, which inspired the code of the 'comitatus': while his lord lived, the warrior owed him loyalty unto death. If his lord were killed, the warrior had to avenge him or die in the attempt. The lord in his turn had the duty of protecting his warriors. He had to be a great fighter to attract men, a man of noble character and a generous giver of feasts and treasures to hold them.

The poem 'Beowulf' describes how a powerful warrior from the lands of the Geats, a Scandinavian people dwelling in southern Sweden, travels to Denmark to do battle with a man-eating monster Grendel that is killing King Hrothgar's thanes in a series of nocturnal attacks. Beowulf rids the Danes of their tormentor and returns to Geatland, where he puts his great strength at the service of his own people in their wars with hostile neighbours. Eventually, he becomes King of the Geats, and years later, when he is an old man, he gives his life in the course of slaying a dragon that had threatened to destroy the nation. 'Beowulf' is an interesting poem because it gives us a very good picture of how people lived and thought in the 7th and 8th centuries. We know that the poem was admired in the 9th century by King Alfred among others, and that poets then used it to strengthen their own work. The author of 'The Battle of Maldon', at the end of the tenth century, borrowed from 'Beowulf'. The code of the 'comitatus' receives one of its last and finest expressions in this poem, especially in the often quoted lines spoken by the old warrior Byrhtwold:

Courage must be the firmer, heart the bolder, spirit the greater, the more our force diminishes.

Here we see a noble manifestation of 'man's unconquerable mind'. In order to appreciate the often beautiful aural effects of Old English poetry, one must know something about Old English metre, which is fundamentally different from the metres of Modern English verse. In Modern English there are many different metrical forms, in Old English there was but one form of versification. The system is based upon accent, alliteration, vowel quantity and specified patterns of unaccented and accented syllables. Each line of Old English poetry is composed of two half-lines, the caesura being indicated by an extra space between the halves. Each half-line has two syllables that are accented: that is, in normal speech they would be pronounced with a heavier accent than the other syllables in the line. The metrical pattern may be described as stressed / unstressed. In this respect Modern English and Old English are much the same.

For twelve years the monster Grendel has left his watery abode at night and come to the royal hall Heorot to seize and devour some warriors of King Hrothgar's. On the occasion described in this selection the Geatish champion Beowulf and his fourteen comrades are awaiting Grendel's attack. The monster stalks across the moor, tears open the door to the hall and gobbles down one of the Geatish warriors before Beowulf can do battle with him. The two then fight, and after the fray the Danes and Geats follow Grendel's tracks to the mere and then return to Heorot. Along the way one of King Hrothgar's thanes celebrates Beowulf's courage by reciting a poem about Sigemund, son of Wæls, Sigemund being the ideal Germanic hero and a worthy figure with whom to compare Beowulf.

The night after Beowulf's victory over Grendel, the Danes are surprised by another monstrous visitant: Grendel's mother comes to Heorot and slays Hrothgar's favourite thane, Æshere, in vengeance for her son's death. Beowulf, who has lodged in a separate building some distance from the royal hall, is brought to the King, and Hrothgar tells him of Æshere's death. He also describes to Beowulf the eerie lair where Grendel and his mother live. As if appalled by his own account of the monsters' dwelling place, he asks almost despairingly whether the hero will consider challenging this second monster. Beowulf's answer is a statement of Germanic heroic ethos.

The last thousand lines of 'Beowulf' describe the hero's final battle with a fire-breathing dragon. He is an old man and, having no progeny, the last of his line. This final section of the poem has a profoundly elegiac tone. The poet describes an unnamed man who is the sole survivor of his people, a people who lived in an earlier age long before the time of the poem's action. As there is no one left to carry on the tribe's history, the heroic ideal of fame as a means of survival beyond death is rendered meaningless. Having no other use for the treasures of his nation, he decides to bury them, and as there is no one to whom he can address his lament, he addresses it to the earth which is receiving the people's treasure.

The old King Beowulf was successful in his fight with the dragon: the creature that had threatened to destroy the Geatish nation was himself destroyed by Beowulf's hand. But in the course of the fight Beowulf received a mortal wound. The poet describes the hero's suffering and death and records his speeches of farewell to his people. The Geats cremate his body in an impressive pagan ceremony, and then we are told in the present selection how they bury his ashes and bid him farewell. The sadness of his funeral is deepened as the people realize that their nation faces destruction now that their hero is gone. With Beowulf's fall the nation will fall, too, because there is no longer a protective influence to keep the surrounding enemies at bay.

Read more: The Adventures of Beowulf