For his plays Shakespeare borrowed freely from older books and stories. The reason why he preferred to use plots that had already proved popular with the public is probably that he wanted to reduce the financial risk run by his company of players. For 'A Midsummer Night's Dream' no single source has been found, but various elements in the play were well-known materials. The central story of Theseus and Hippolyta is found in Chaucer's 'Knight's Tale'. The romantic plots of the rival lovers follow a standard formula in Elizabethan drama. The 'tragical comedy' of Pyramus and Thisbe derives from a classical tale told by Ovid, which was retold by Chaucer in the 'Legend of Good Women'. These and other elements, partly traditional and partly original, were combined by Shakespeare with all the vigour and creativity of his dramatic art to produce a play which is probably the most popular of his early comedies.

The play must have been written to be performed at a grand wedding at some nobleman's house. The action moves in three different worlds: the noble world of the court of Theseus, the world of ordinary mortals, and the wonder world of the fairies where anything is possible. There is a circular motion in the play, which operates through Theseus, the central character that directs the action. We meet him right at the beginning and though afterwards he remains in the background he continues to control the events. It is Theseus who arranges the marriage of the four lovers. His own marriage envelops the play and his final comment summarizes it. Shakespeare effected a balance by setting the first and the last act s in the daytime, whereas the action of the central acts take place in the dark of night. There is also balance in the scene of action, which is Athens in the first and the last acts, and the wood in the central acts.

A constitutional element found in several of Shakespeare's plays is the 'play within the play', here performed in the last act by Bottom and his friends. The theme is falling in love. Love is presented as a kind of magic beyond the control of men, caused by the juice of one flower and stopped by that of another. How irrational love can be is shown especially in the helpless passion Titania suddenly feels for the ridiculous Bottom with his ass's head. Thus Shakespeare satirizes love at first sight. But at the end of the play he also shows its positive aspect when Theseus describes love as a constructive madness, comparing the lover with the poet because both create things by their imagination. There are several plots: the love plots of four pairs of lovers, namely Theseus and Hippolyta, Oberon and Titania, Demetrius and Helena, Lysander and Hermia.

Then there is the plot of the craftsmen preparing a play for performance at the noble wedding, and finally the mistake made by Puck in applying the juice of the flower. It is this plot that links up all the other plots. It connects the Oberon - Titania plot with that of the rival lovers and with the marriage of Theseus and Hippolyta, and through the Titania - Bottom affair also with the craftsmen's plot.

Tom SNOUT, a tinker; WALL in the Interlude

Shakespeare's plays were written in five acts. The classical unity of time, place and action were not observed.

Theseus, Duke of Athens, is about to wed Hippolyta, Queen of the Amazons. While making preparations for the wedding festival Theseus grants and audience to old Egeus, who complains that his daughter Hermia disobeys his commands to marry Demetrius because she is in love with Lysander. In strict accordance with Athenian law Theseus orders Hermia to choose between obeying her father, entering a convent, or being punished by death. Hermia and Lysander decide to run away to a wood near Athens. However, they make the mistake of telling Hermia's friend Helena what they are going to do. Helena loves Demetrius although he has rejected her in favour of Hermia, and by betraying Hermia's plans to him she hopes to win him back. Meanwhile Bottom, Quince and some other Athenian craftsmen are preparing to perform a play entitled 'The Most Lamentable Comedy and Most Cruel Death of Pyramus and Thisbe' on the occasion of the Duke's wedding. They arrange to have a rehearsal in the wood to which Hermia and Lysander have fled.

The wood near Athens is the scene of a quarrel between the fairy king Oberon and his queen Titania over the possession of a little changeling boy. Oberon and Titania have come with their retinue of fairies from India to bless the wedding of Theseus and Hippolyta, but their violent disagreement shakes all nature. Oberon orders Puck, a mischievous fairy, to get a flower called Love-in-Idleness, the juice of which Oberon intends to drop into Titania's eyes while she is asleep. This will make her fall in love with the very first living creature she sees when she wakes up. While Puck is circling the globe on his errand Oberon overhears Demetrius reproaching Helena for following him into the wood where he hopes to find Hermia and Lysander. On Puck's return with the flower, Oberon, wishing to reconcile Demetrius and Helena, commands Puck to squeeze the juice into Demetrius's eyes, after making sure that Helena is near. Oberon himself places some of the love-juice on Titania's eyelids. In the meantime Puck finds not Demetrius, but Lysander asleep with Hermia beside him and applies the love-juice to his eyes. It so happens that not Hermia but Helena is the first person Lysander sees, with the result that he makes violent love to her. This makes Helena angry because she thinks he is making a fool of her and she flies into the wood, pursued by Lysander. Hermia, waking up and finding herself alone, sets out in search of Lysander.

The craftsmen have just begun to rehearse their primitive play near the place where Titania is asleep when Puck plays a trick upon them by putting an ass's head on Nick Bottom. His comrades run away in terror, but Bottom, unaware of what has happened to him, awakes Titania by the song he sings in order to keep up his courage. Titania immediately falls in love with him and orders her fairy servants to wait upon him. Bottom accepts Titania's love and the services of her fairies without showing any surprise. While Puck is reporting the success of the trick to Oberon, Demetrius tries in vain to win Hermia, who accuses him of having murdered Lysander in his sleep. She runs from him and Demetrius lies down and falls asleep. When Oberon discovers Puck's mistake, he orders him to bring Helena and applies the love - juice to Demetrius. As Helena approaches, followed by Lysander, the talk between them wakes Demetrius and he at once falls in love with Helena. Now the two men both make love to Helena as they did before to Hermia. When the unhappy Hermia returns she starts a quarrel with Helena, whom she accuses of having stolen Lysander's love. The two young men leave them to find a suitable place to fight, and Helena, afraid to be left alone with the fierce Hermia, runs off pursued by her rival. At Oberon's command Puck throws a dense fog about the four young people and brings them all together. Unaware of one another's presence they fall asleep. Puck removes the charm from Lysander's eyes by squeezing into them the juice of a herb, which kills love at once. 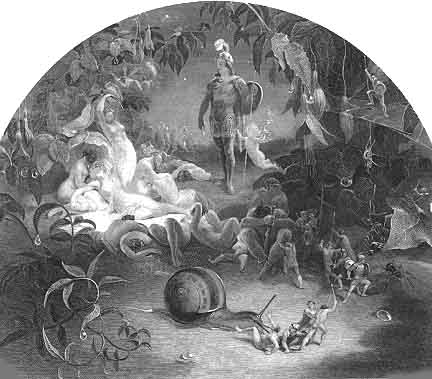 Oberon reproaches Titania for falling in love with the monstrous Bottom and in her confusion takes the changeling child from her. Now he takes pity on her and releases her form the charm. At the same time Puck removes the ass's head from Bottom. At Sunrise Duke Theseus, his betrothed Hippolyta and their retinue come to the wood to hunt. There they discover the rival lovers sleeping on the ground. Theseus, remembering that it is the day on which Hermia is to make her decision, orders the huntsmen to wake them with their horns. Egeus, who is among the retinue, again commands Hermia to marry Demetrius, but this young man rejects her, declaring his love for Helena. Hermia and Lysander are thus free to marry and all the difficulties and misunderstandings have been cleared up. Theseus invites the four young people to celebrate their weddings together with that of himself and Hippolyta. Nick Bottom awakes from what he believes was a 'most curious dream' and returns to Athens, where Quince and the other craftsmen have already abandoned the hope of ever seeing him again. They immediately begin to make preparations to perform their play at the Duke's wedding.

Contrary to the advice of Philostrate, the master of ceremonies, Duke Theseus chooses 'The Most Lamentable Comedy of Pyramus and Thisbe' to entertain his guests on his wedding-day. Bottom, Quince and their colleagues perform it to the amusement of their courtly audience and follow it up with a 'Bergomask Dance'. The clock having struck the hour of midnight, the lovers and their guests retire, Oberon and Titania entering the palace followed by their train of fairies. Singing and dancing they bless the marriages of the three pairs of lovers and disappear. Puck remains alone on the stage to speak the epilogue.