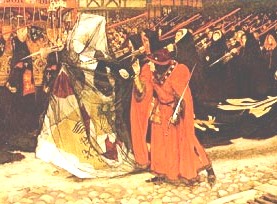 Richard III opens with the arrival of Richard, Duke of Gloucester, in London. His oldest brother, King Edward IV, is slowly dying as a result of overindulgence in ‘the good life.’ The ambitious, restless Richard sees an opportunity to attain the crown for himself. The first step is to get rid of his other brother, the Duke of Clarence, who has a closer claim to the throne as the older heir. Richard instigates a rift between the king and Clarence which results in Clarence’s being imprisoned in the Tower of London. Later he is executed by murderers sent by Richard. Richard’s next move toward his goal is to propose marriage to the great Neville family heiress, Lady Anne, widow of the son of the late Henry VI. Richard has played a role in the death of both her husband and her father-in-law and this presents a huge obstacle to such a match. In an extraordinary demonstration of his persuasive powers, he convinces Anne to marry him.

Meanwhile, Edward IV’s wife, Queen Elizabeth, is concerned that Richard has been named Protector of the Realm, making him guardian of her young son Edward, heir to the throne. There is no love lost between her family and Richard, who resents their rise to power. King Edward summons his wife and nobles to meet to settle their differences, but on their way they are interrupted by old Queen Margaret, widow of Henry VI, who was exiled but who has never left the country. She recalls past horrors and predicts future disasters for the country. Her hatred for Richard is so great that she curses him and all those responsible for the evil she has witnessed, predicting a bad end for them all.

During the reconciliation attempt, Clarence’s death is announced. Soon afterwards King Edward dies and Richard begins to conspire with the Duke of Buckingham to succeed his brother. They set off to bring young Edward, the Prince of Wales, to London to await his coronation. In their absence Queen Elizabeth learns that Richard has imprisoned her brother and a son by a previous marriage. Fearing for her life, she flees to the protection of church sanctuary with her youngest son, the Duke of York. When the Prince of Wales’ party arrives in London, Buckingham arranges to have the little Duke of York taken from sanctuary. The two brothers are then sent for their safety to the Tower of London. Lord Hastings, an old alley and friend to the family of t he late King Edward IV, is questioned about the possibility of Richard’s succession to the throne. He forcefully rejects the idea, thus signing his own death warrant. At a subsequent Council meeting, Richard accuses Hastings of treason and condemns him to death. Buckingham then addresses the public, praising Richard and instigating the rumour that the late King Edward’s children are illegitimate. Although the crowd is unmoved, city officials are convinced that only Richard can prevent civil disorder. A delegation arrives at his residence and, through Buckingham, pleads with him to accept the crown. He ‘reluctantly’ does so after pretending to have no interest in becoming king.

Once Richard is on the throne, he must secure his position. He first tries to have Buckingham eliminate the legal heirs - the young boys in the Tower - , but Buckingham hesitates. So Richard arranges for their murder himself. He now reveals his next move: he will get rid of his wife and solidify his power by marrying his niece, the daughter of Edward IV and Queen Elizabeth. Buckingham is in disfavour and flees. Shortly afterwards Richard’s problems begin to intensify. There are stirrings from France, where the Lancastrian heir, Henry, Earl of Richmond, is in exile. Buckingham has raised an army and is marching against the King. Richard must take up arms against these enemies. But first he attempts to win Queen Elizabeth to his side in his plan to marry her daughter. Her defenses are eventually worn down and she appears to give her consent to the marriage.

Meanwhile the forces against Richard are mounting. But Buckingham has been defeated and is eventually captured and executed. Richmond lands in England and establishes a position at Bosworth Field, near Richard’s army. The two camps settle in to prepare for battle the next day. During the night, Richard receives the news of desertions among his allies, but his troops still outnumber the enemy three to one. Richmond is informed that Queen Elizabeth has approved of his marriage to her daughter, which upsets Richard’s plans. At night, the ghosts of Richard’s victims appear in both commanders’ dreams. Richard is shaken by the vision of his own tyranny but vows to carry on his fight. Richmond is encouraged by the good wishes of Richard’s victims. Both leaders address their troops, exhorting them to fight bravely. Richmond stresses the security of the country, while Richard condemns his enemies as a band of vagabonds and exiles. During the battle, Richard fights bravely, but is slain by Richmond. The victor, Richmond, declares an amnesty and vows to unite the two families through his marriage. He will establish the peace that has been denied to England for so many years.

Act One Scene One

Richard: Now is the winter of our discontent
Made glorious summer by this son of York;
And all the clouds that lour'd upon our House
In the deep bosom of the ocean buried.
Now are our brows bound with victorious wreaths,
Our bruised arms hung up for monuments,
Our stern alarums chang'd to merry meetings,
Our dreadful marches to delightful measures.
Grim-visage'd War hath smooth'd his wrinkled front:
And now, instead of mounting barbed steeds
To fright the souls of fearful adversaries,
He capers nimbly in a lady's chamber,
To the lascivious pleasing of a lute.
But I, that am not shap'd for sportive tricks,
Nor made to court an amorous looking-glass;
I, that am rudely stamp'd, and want love's majesty
To strut before a wanton ambling nymph:
I, that am curtail'd of this fair proportion,
Cheated of feature by dissembling Nature,
Deform'd, unfinish'd, sent before my time
Into this breathing world scarce half made up -
And that so lamely and unfashionable
That dogs bark at me, as I halt by them -
Why, I, in this weak piping time of peace,
Have no delight to pass away the time,
Unless to spy my shadow in the sun,
And descant on mine own deformity.
And therefore, since I cannot prove a lover
To entertain these fair well-spoken days,
I am determined to prove a villain,
And hate the idle pleasures of these days.
Plots have I laid, inductions dangerous,
By drunken prophecies, libels, and dreams,
To set my brother Clarence and the King
In deadly hate, the one against the other:
And if King Edward be as true and just
As I am subtle, false, and treacherous,
This day should Clarence closely be mew'd up
About a prophecy, which says that 'G'
Of Edward's heirs the murderer shall be -
Dive, thoughts, down to my soul: here Clarence comes.